It’s true, March came in like a lion and out like a lamb. Cold, rainy and miserable for those who were finishing work in the vineyard pulling brush and cane (Low av. 37 degrees High av. 56 – rainfall for the month 3.98) Miserable working conditions but I do love it when the canes are all tied and ready for shoot growth. They look so zen like for these few weeks before shoot growth. It’s another early year even though bloom hasn’t happened – buds are swollen and beginning to unfurl their leaves. The valley is already seeing leafs unfold out of the tiny buds but we’re about two weeks behind the lower elevations. With temperatures in the mid 70’s here at the end of March, I’m sure we’ll catch up quickly! 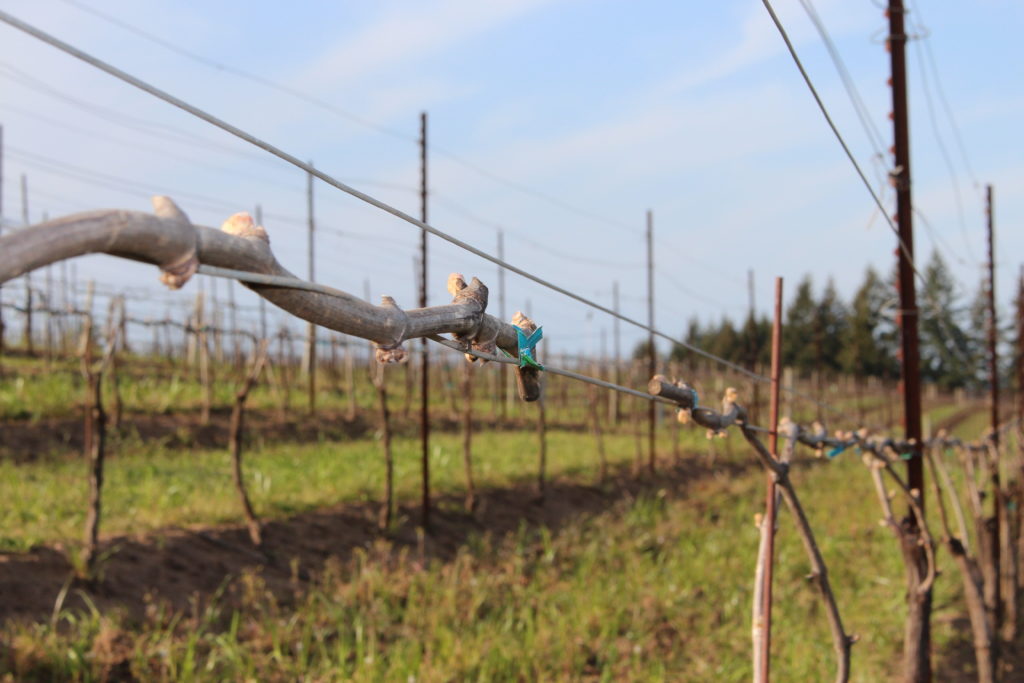 I had a lunch with a friend of mine the other day. He’s in a position that gives him with an in-depth view on the land grab for Oregon vineyard properties. We’ve talked about the big players that have entered the scene before (ie. Jackson family) but his brow was more furrowed now and his message grim. The days of passionate owner, farmer, winemakers with smaller plots and artisans wine are over – if not irrelevant in the shadow of the big players in the pipeline. Investment firms are buying acreage by the hundreds, and not just raw land but the small farms once thought of as Oregon terrior. It’s not just investment groups but the “frogs” – and not the cute green ones but notable French families that come with mad “old world” winemaking skills. Sure,the notoriety of Oregon vineyard property is a welcome nod to our quality soils and ability to produce world class wines. But let’s be clear, it changes the landscape of what we’ve come to know as the “Oregon brand.” And then he dropped the bomb with one name. “Once Gallo shows up…” Not, if but when. The gorilla is on the way. As he talked, I stared down at my first glass of wine since the baby and became increasingly sad. Our unique, collaborative, boot strap culture of passionate entrepreneurs is becoming increasingly diluted by big money, muscle and old world stylings. Now, I’m a firm believer in diversity making a richer, more creative and wildly more interesting experience but I can’t help but wonder, what will become of the small family farm in the midst of the globalizing wine making machine? The answer made even the most coveted glass of wine taste sour.

On a more personal note….

My neighbors, Steve and Deanna came over for tea one early afternoon and let me know his mom had passed away. She had just celebrated her 90th birthday last December. Even though she was an older woman, I was shocked and saddened. She was a great lady and Steve and Deanna have been part of her life here on the hill for many years. I only got the chance to meet her those couple of times when first getting to know the family and Finnigan Hill history. Still, I remembered the room in the basement full of quilting squares and her kind disposition that shared photos and stories of her years here on the hill. I’ll never forget sitting in her old farmhouse writing down names and logging dates of photos when she stood quickly and asked the time. Steve said it was nearly noon and she scooted off. I looked at him puzzled then heard a bell outside. He said she liked to ring the bell everyday at noon. There we were surrounded by forested hills and long winding gravel roads but every day Gerrie made a point of sending out her call to the world. Maybe she had a thing for lunch time, or maybe it was a schoolgirl memory, I’ll never really know. But it made me smile – it didn’t matter if it were bird, brother or breath of wind that heard that bell, she made her mark everyday. God Bless Miss Nellie Geraldine Jinings, bells will be ringing for you now.